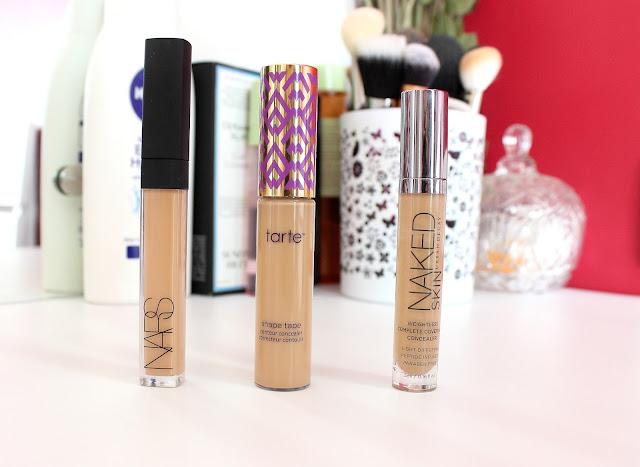 These three are probably the most talk about concealers all over the internet in recent times and all of three of them have rave reviews by their admirers for different reasons. The under eye concealer game picked up with the release of Nars Radiant Creamy Concealer a couple of year ago, imo, which further got intensified when Urban Decay released its Naked Skin concealer and the later one ruled the charts for some time. The tube and wand type of concealer duel became much more intense with the release of Tarte Shape Tape Contour Concealer a few months ago and it featured in yearly favourites of almost all the YouTube beauty gurus.

I had been using the Nars and UD concealers for some time and the Tarte's rave reviews intrigued me to try it. I have been using the three concealers alternatingly for last couple of months and have not made up my mind about each of them. 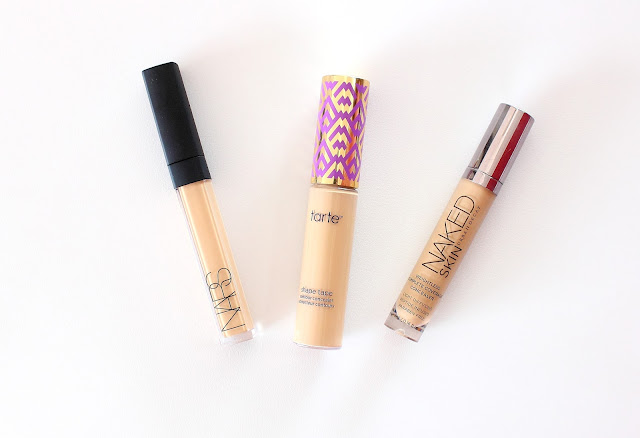 Despite being in similar tube and wand category of full coverage concealers, these, are different in their own ways. While Nars concealer is creamy and thick UD concealer is much more liquidy but sets to a matte finish and Tarte concealer is on another level - its creamy, it sets quickly to a matte finish and feels light-weight and the coverage is much more than the previous two, imo. Nars concealer invariably creases under my eyes and I have to literally bake everytime I use this concealer. UD and Tarte concealers sets easily under my eyes without crease and they hold well through the day with light dusting of powder.

I prefer the UD concealer over the other two for its forgiving formula. Tarte concealer is too heavy duty for me for everyday use. Don't get me wrong when I say this, but, the first time I tried the Tarte concealer I applied too much and it refused to blend cohesively with the rest of my face makeup. Lesson learned, you only need to dot the Tarte concealer instead of swiping it all over under the eye area, unlike other concealers. For photos and special occasions when I have plenty of time to correct mistakes (if any), Tarte is my hands down favorite. That's why, IMO, UD concealer is more appropriate for me on a day to day basis as the formula is more forgiving.

Let's just look at the applicator of Tarte concealer - its huge and it has grove sort of a thing in it and hence it holds a lot more product than a traditional doe foot applicator like the Nars concealer. UD concealer's applicator is a double sided applicator, which I prefer as I don't have to dip my applicator twice in the tube. Just the personal preference of a forever late corporate executive. 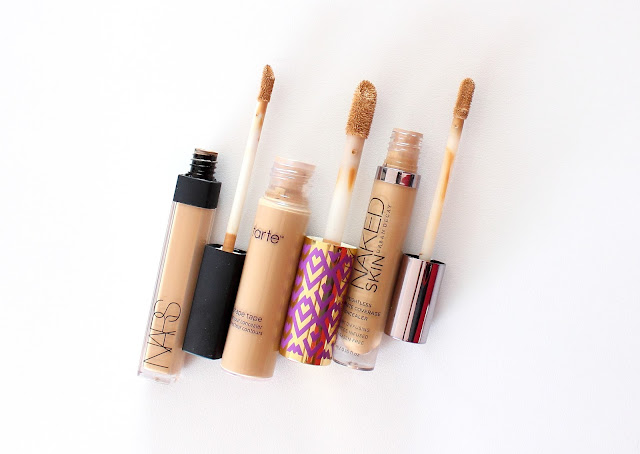 I got my Nars and UD concealers from Selfridges and Tarte concealer from the company's website.

Nars has released a new variant to its Radiant Creamy concealers - Nars Soft Matte Complete Concealer and this concealer is also getting rave reviews from the beauty community. And, I am very intrigued to try this concealer out as I am curious to see how well it performs under the eye areas considering that its pot concealer with matte finish.

I hope you enjoyed this smackdown post, instead of review of just one product.