Hope you all are happy and healthy.


I am soon going to run out of my Urban Decay 24/7 eyeliner pencil Zero, which I have been using for almost like an year now! So, I bought this Lakmè Absolute Ultimate Kohl as a lot of people have been raving about it since it's launch. Well, the product is worth all the rave and love it's getting.

Though, I was wearing the Urban Decay Zero almost all throughout the year, I was searching for a really dark black eye pencil. A dear friend told me that no one really makes a blackest black eye pencil.

I have heard of Urban Decay 24/7 pencil in Perversion and Esteè Lauder Double Wear eye pencil in Onyx, they being really dark. Then I read a very detailed review at Corallista make-up blog here and decided to give this pencil at least a try.

Well, I tried it for the first time today and I was SO.... impressed that I decided to immediately write a First Impression post about it. This product is so creamy that it glides on the waterline like a dream, just one stroke and you get the intensity. Yep, its creamier than Urban Decay 24/7 pencils and it's blacker than Urban Decay 24/7 Zero. The pencil is so insanely creamy then, I broke the point while swatching and then later I accidentally put the sharpener cap and again the point broke and messed up the cap top from inside. You will have to believe me that in either of the cases I did not apply any pressure, it's that creamy. And, I realized this after applying a newly sharpened point in both the eyes. The point was almost 2/3rd the original size! So, ladies and gentlemen please beware of the creaminess of the pencil, if you are a first time user like me :D

As this is an extremely creamy pencil, it's easier to smudge it if you want to use it as a base. But, this creaminess did not cause any smudging around my eyes through out the day and it was there where it was supposed to be, inside my water lines. It faded slightly near the outer corners of my lower water line, but, by then it was already evening and it was applied in the morning at around 8.30ish.

So, its creaminess, its blackness and it's staying power won my heart and more so over, its cheaper than many of its expensive comparable alternatives like MAC Graphblack and Urban Decay counterparts (not sure it would be Zero or Perversion). Its price is INR 675/- and the shop from where I bought this had some discount going on, so, I paid only INR 640/-.

This pencil comes with a sharpener attached in its cap, which, to me is quite handy. You don't have to dig in your stash for a small sharpener. Though, I have a habit of keeping my stuff handy!

Overall, I liked it very and would say it's a great find. I am more happy because it's not expensive and delivers what it is supposed to. First impression : Absolute Winner! Having said that I would still like to try Urban Decay 24/7 perversion and Esteè Lauder double wear Onyx!

Here are some pictures and swathes of the pencil : 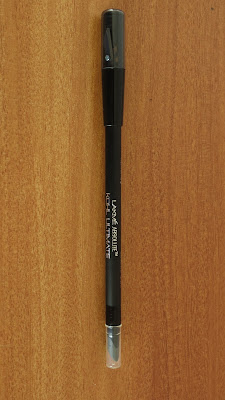 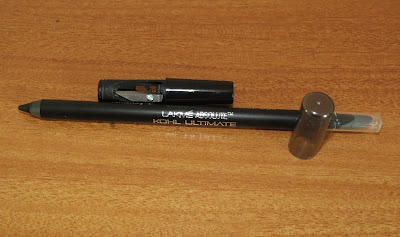 These are my first impression thoughts and I might update the post to any changes, and will also update to a complete REVIEW after having tried for at least a week. So, stay tuned to this post for updates on Lakmè Absolute Kohl Ultimate performance. I will be update my views on Twitter on the performance everyday this entire week, that is until next Friday. (My Twitter ID and the link to my Twitter profile is just after the post)

Have you tried the Lakmè Absolute Kohl Ultimate? Were you also equally excited as I am? Let me know in the comments below.